I love farm tours! So when I heard that the Georgia Organics – Farm Rx Conference was having a cultural farm tour, I definitely knew I had to go!

The Global Growers Network is a local non-profit that works primarily with people who have been forced to flee their countries because of war and persecution. Through a network of farms and gardens, many people who were farmers back home have an opportunity to share their traditional farming and local food practices with their new community here in Georgia.

The first stop of the tour was on a cold, rainy February day in North-Central Georgia. We visited Umurima Wa Burundi, also known as the Burundi Women’s Farm, which began three years ago as a partnership between Global Growers Network founder Susan Pavlin and a community of Burundian farmers who fled their impoverished African home.

When the farmers first came to Decatur, Georgia, they were at a loss as to how to make a living in a land of strip malls and fast-food restaurants. When Pavlin saw their plight, she decided to help. She worked out a deal with the owners of a small plot of land to permit the families to farm there. Today, almost one acre is cultivated communally under the leadership of the Burundian women, who grow traditional East African crops as well as “American” produce for their families, the local markets, and the Global Growers Network’s community supported agriculture (CSA) program. There are 15 families from Burundi who assist with the garden. They also make their own compost from green and brown matter.

It was great to speak with the Burundian women and hear how they farmed in their home country. One great story was how, in the first days of the garden, Pavlin noticed that the Burundian women were unhappy with some of the gardening tools available. One of the women requested use of a hoe to cultivate the soil and kill weeds. So Pavlin found a gardening hoe and gave it to the woman. She became mad and said, “This is not a gardening hoe.” Pavlin thought something got lost in translation and repeated that this is a gardening hoe. Her interpreter noticed that Pavlin did not understand and started to explain and show what a Burundian hoe looks like. Check out this picture to see the difference between an American hoe (in her left hand) and a Burundian hoe (in her right hand): 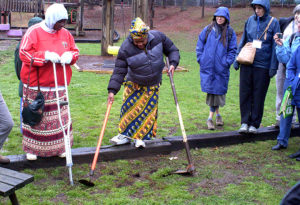 Well, Pavlin knew that there is no way that she could find this exact tool for sale in the United States. So what to do? First the ladies wanted to enlist someone to travel to Burundi and purchase this very sharp bladed hoe and bring it back in an airplane. Well, TSA would definitely not like this! So the women decided to make their own hoes — with the help of a blacksmith. 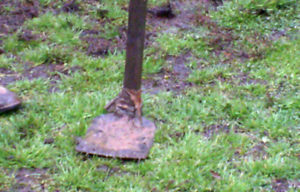 This touch of home made the farmers of Umurima Wa Burundi so happy that some fellow gardeners have requested to buy their own. Hey, this may be a new business venture for them!

Denine Rogers, MS, RD, LD, FAND, is a nutritional consultant based in Douglasville, GA, and owner of Living Healthy, She blogs at livinghealthy1.org. Follow her on Twitter and Instagram.