When I first moved to Japan in the summer of 2011, I was amazed by all of the different produce around me. I took some time to acquaint myself with the new foods and took cooking classes to learn how to prepare them. Months passed and suddenly I realized that it wasn’t summer in Japan anymore; it was fall.

Watching the leaves change color sent a rush of fall memories flooding back. You see, I had lived in Las Vegas for 5 years, and then the Azores for a couple of years before Japan. While in these different climates, the essence of fall had escaped me. Now, in Japan, I remembered that, despite the chill in the air, fall was a beautiful season and I really do enjoy it.

When I think of fall, I think of apples, pumpkins and sweet potatoes. I was definitely in luck, especially up in the northern region of Honshu. This is the apple capital of Japan and they do not messing around with quality apples around here. In fact, just about everything is apple near where I live. All the apples seem picture perfect and worthy of a bite. Local farmers markets sell apples by the crate. They are pricey, as most things in Japan are, but worth it, just as long as you do not go overboard and by more than you can eat. Trust me, I have been there! They are wonderful to eat by themselves, but the Japanese will also make an apple pie, minus all the sugar that is common in American products. I love it without all of the added sugar because you really get the chance to taste the true flavors of the apple.

Another wonderful food here in Japan for fall (and really year-round in Japan) is the kabocha, a Japanese pumpkin. In fact, “kabocha” is the Japanese word for pumpkin—the variety that grows in Japan is now available in the U.S. and simply called kabocha. It is different from your regular, orange American Halloween-and-Thanksgiving-style pumpkin. This squash is green on the outside, orange on the inside, and the skin is thin. It is so thin that it is eaten along with the inside flesh of the pumpkin. This was something I had to get used to the first time a Japanese local offered me some boiled, salted kabocha. I was hesitant because I was not used to eating all of the pumpkin, but I fell in love instantly!

Another of Japan’s different fall vegetables is the sweet potatoes. I was amazed at the differences between sweet potatoes in Japan compared to those in the United States. I was used to eating sweet potatoes that are brown on the outside, and bright orange on the inside. Here, we have purple sweet potatoes! But the “unno” variety is the one that brings to mind fall harvest for us here in Japan. This may be available year-round, but becomes very popular during the holiday season because it is the Japanese sweet potato most closely resembling the American sweet potato. They do look a little different, but after cooking they turn a nice orange color.

The flavor is wonderful and so reminds me of fall that I was inspired me to make a delicious fall soup—which is very much needed in chilly northern Japan where it often snows starting in November. 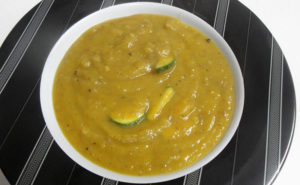