Most of us are familiar with MyPlate, the USDA‘s healthy eating guide. For the first time in nearly 20 years, this food guide is not in the shape of a pyramid. (For more history, check out this fascinating look at the evolution of the USDA’s food guides). I completed my dietetic internship at the height of MyPlate’s predecessor, MyPyramid, and let me tell you: MyPyramid had a lot of critics. Some of the frequent complaints from non-nutritionists I heard were:

Hungry readers, I hear you. MyPyramid had its flaws. And while its successor, MyPlate, is far from perfect, I am on board with the direction in which these food guides have moved. Anecdotal evidence suggests that MyPlate is easier to understand. I can see why. A simple visual we see several times a day (i.e. a plate of food) is more effective than a pyramid that requires a lot of explanation.

The basic idea behind MyPlate is that by filling your plate with foods in the proportions suggested, you’ll eat plenty of nutrient-packed fruits and veggies and a moderate amount of protein and grain-based carbohydrates. Following MyPlate will also regulate the amount of food energy you eat (i.e. calories). Of course, if you eat more than one MyPlate in a single meal, or eat from a 15-inch serving platter, you’ll defeat the purpose of this guide.

What about cups, oils, discretionary calories and physical activity? These factors still count, but they’re not front-and-center in the MyPlate graphic. The USDA still recommends certain amounts of the different food groups, and they give guidelines for oils and discretionary calories. See here for more info.

So, what does MyPlate mean to me as a registered dietitian? I have a series of posts on my website called “Update Your Plate” where I take apart typical meals (e.g. combination plates, pizza, breakfasts) and build them up to meet MyPlate guidelines. A few examples are pictured in the header of this post.

One of my most popular Update Your Plates was when I MyPlate a smoothie (and yes, I did just “verb” the word “MyPlate”). 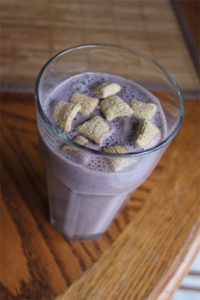 How could you possibly lay this out on a plate? Well, let me show you: 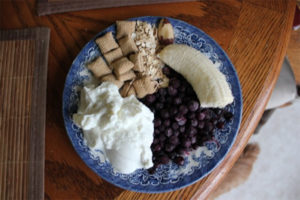 Let’s look at this with the handy-dandy MyPlate template over it: 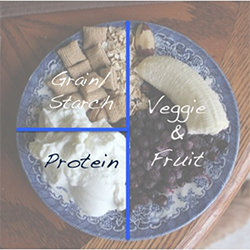 You can see the smoothie ingredients roughly follow MyPlate (remember, this is an approximation, not an exact science). I’ve chosen whole grains instead of refined grains, and nonfat or low-fat Greek yogurt instead of full-fat yogurt. Making healthy swaps are an essential part of the MyPlate universe.

Those of you who are very familiar with MyPlate may notice that I’ve technically made an error: yogurt is considered part of the “Dairy” group, not the “Protein” group. While I understand the reasoning behind this choice, Greek yogurt is both high in protein and calcium. As many people don’t otherwise eat much from the Protein group at breakfast (and no, two slices of bacon doesn’t count), yogurt is a great occasional alternative.

Here are some of my other Update Your Plate adventures: