The Abenaki Native American tribe in New England has a story to tell about maple syrup. Long ago, the Great Spirit gave the Abenaki people an abundance of food. One of the Great Spirit’s biggest gifts was the maple tree; one only had to break off a twig and the sweet syrup would flow.

Concerned about his people’s well-being, the Great Spirit sent Gluskabe as an envoy to check on the Abenaki. Wandering from village to village, Gluskabe came upon a town in disrepair. He heard a loud, collective moan and found the villagers lying under the maple trees, syrup dripping into their mouths. All the sweet syrup had made the people unhealthy and lazy, and they couldn’t move.

Gluskabe reported his findings back to the Great Spirit, who was displeased. He stopped the flow of syrup and filled the maple trees with sap instead. When the villagers eventually woke from their stupors, Gluskabe told them that from then on, they would need to work for the sweet treat of maple syrup by hauling rocks, lighting fires and boiling the sap over the hot stones.

Today, not many people heat stones and boil buckets of sap to make maple syrup, but the basic process — heating collected maple sap until sweet syrup forms — hasn’t changed. Acer saccharum, or the sugar maple, is the traditional tree tapped for maple syrup production each spring.

Trees are tapped as early as January, depending on the weather, according to Randi and Louise Calderwood, the owners of Echo Hill Farm — a fifth-generation maple syrup farm in East Craftsbury, Vt. “The rule of thumb is that the trees should be tapped by Town Meeting Day,” says Louise Calderwood. Town Meeting Day marks Vermont’s admission to the Union in 1791, and it takes place every year on the first Tuesday of March. “But cold weather can pop the taps out, so you have to go through and tap them back in. In January, you spend time repairing the sap lines.”

How Maple Syrup Is Made

The sap is moved into an evaporator, where it snakes through a series of steam pans over a heat source, increasing in sugar concentration and decreasing in water after progressing through each pan. Sap officially becomes syrup at 219 degrees Fahrenheit. By the time it gets to the last pan, the maple sap has turned to maple syrup.

From A to B: Maple Syrup Grades 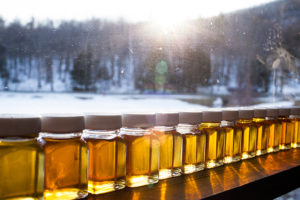 Maple syrup characteristics vary according to when a syrup was made during the maple sugaring season. The earlier in the season the sap is harvested, the more translucent the syrup. But contrary to popular belief, syrup grades do not suggest superiority, merely different attributes.

The United States and Canada use different terms for national maple syrup grades, and some states, such as Vermont and New York, use their own classification systems to regulate production and marketing. Last year, the Vermont Maple Syrup Makers Association released new labeling standards “to provide a more accurate description based on consumer preference.” Labeling all four classifications as “Grade A” syrups and describing both color and flavor, New York State also is adopting these standards. “The goal is that it will become an international standard,” says Helen Thomas, executive director of the New York State Maple Producers Association.

Learn more about proposed changes to maple syrup grades and what those definitions mean.

To this end, the maple syrup industry petitioned for revisions to the federal classification system, and from May 7 to July 7, 2014, the USDA Agricultural Marketing Service collected comments on proposed changes that would shift the emphasis to flavor. As of press date, no announcements have been made about changes to the federal grades for maple syrup, but should the revisions be accepted, the expectation would be that the Canadian food inspection agency would be on the same trajectory, according to Matt Gordon, executive director of the Vermont Maple Syrup Makers Association.

No matter where maple syrup hails from in North America, its nutritional content is nearly identical. Despite being primarily sugar (about 66 percent by weight, mostly in the form of sucrose), maple syrup contains a variety of nutrients and potentially beneficial natural compounds, including small amounts of amino acids as well as polyphenols. It’s a good source of the B vitamin riboflavin (61 percent Daily Value), as well as several minerals: a standard ¼-cup serving provides more than 100 percent of the Daily Value for manganese, and roughly 8 percent of the Daily Value for both calcium and zinc. In fact, scientists have identified more than 60 compounds in maple syrup, including phenolics that inhibit carbohydrate hydrolyzing enzymes and a “process-derived compound” aptly named Quebecol (for the Canadian province of Quebec, the world’s leading maple syrup-producing region). Created when sap is boiled down into maple syrup, Quebecol is a novel phenolic compound that has yet to be tested for bioactivity in animal or human studies. At roughly 50 calories per tablespoon of maple syrup, portion control is called for — but as far as sweeteners go, maple syrup has a lot going for it.

Although pancake purists may scoff, topping a short stack is merely the beginning when it comes to culinary uses for maple syrup. Using maple syrup in cooking provides a depth of flavor that goes beyond sweetness. In fact, darker syrup is sometimes preferred for its more robust flavor and color — but they are all interchangeable as long as you’re using 100-percent maple syrup. Here are a few ideas:

Kit Broihier, MS, RD, LD, is a writer, nutrition instructor and recipe developer based in South Portland, Maine. She is president of NutriComm Inc., a food and nutrition communications consulting company. Find her work on nutricomminc.com and glutenfreeslowcooking.com, and follow her on Facebook, LinkedIn, Pinterest and Twitter.

Erin Sund was an editor with Food & Nutrition Magazine.