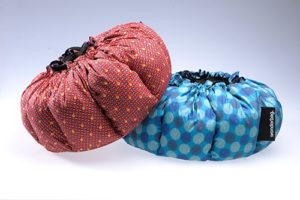 I recently discovered a new product called the “Wonderbag,” manufactured by Knorr. The Wonderbag is essentially a portable crockpot that doesn’t require electricity, gas, or any other type of energy or resource. Using it is pretty simple, here’s how:

Step 1: Boil It
Prior to being placed in the Wonderbag, all recipes must be brought to a boil for at least a minute. The Wonderbag comes with a great collection of recipes, however I decided to make some of my own chili for this cold winter weather.

Step 2: Bag It
I removed the chili from the stove and placed it inside the Wonderbag, making sure to tightly seal the top. The ingredients inside the bag will continue to cook for up to 12 hours, according to the Wonderbag makers.

Step 3: Wait
The Wonderbag makers recommend letting your meal stand for at least 1 hour in order to fully cook and allow flavors to enhance.

Step 4: Serve
I removed the chili from the Wonderbag and served it. It was flavorful and delicious. The vegetables (bell peppers, carrots) and turkey were fully cooked, tender, and tasty.

A Tool with a Worldwide Focus

The Wonderbag is a great and easy way to include many vegetables into your diet. It is lightweight, versatile, and environmentally friendly. However, the Wonderbag isn’t just for the resource conscious American consumer. In fact, it was created specifically for use in developing countries, where resources for cooking (such as electricity, gas, and wood) are finite.

For the last two years I have been living and working in a rural village located in Burkina Faso, West Africa. The majority of people in my village lived without electricity or running water. Women did most of the cooking, and in order to prepare meals they would often travel three to six miles (five to 10 kilometers) by foot to find wood, which they would then use to heat their meals. Not only does this contribute to deforestation, it also places women at increased risk for diseases (such as malaria, prevalent in rural areas where firewood is found).  Search for firewood also increases the time women spend traveling alone, thus exposing them to increased rates of physical and sexual abuse.

Not only would the Wonderbag greatly diminish these issues, it may also help to decrease rates of diarrheal diseases. In rural villages, many women cook their food in large uncovered pots, leaving their food open to flies, which lead to hygiene problems. Keeping the food covered by the Wonderbag, as well as keeping it at a high cooking temperature, decreases risk of diarrheal disease.  Additionally, the Wonderbag’s colorful outside design is reminiscent of many traditional African textile patterns that are extremely popular among women in Africa and may be an incentive for use.

Some challenges may be encountered while using the Wonderbag. Worldwide, behavior change is a difficult thing to achieve. Thus, traditional cooking practices will take time to change. Low literacy rates may provide a barrier to fully understanding how to use the Wonderbag. Although the bag is fairly large, there is a limit to the size pot that can fit inside of it, which may not be appropriate for big families both in America as well as in developing countries.

Regardless of your location, the Wonderbag can be a useful addition to your kitchen. Boil, bag, stand, serve, and most importantly, enjoy!

Alexandra Kuznetsov, RD, is a Chicago-based registered dietitian working on maternal and child health issues. She is a returned Peace Corps volunteer from Burkina Faso, West Africa, and is the country representative for Burkina Faso with the American Overseas Dietetic Association. Connect with her on LinkedIn.