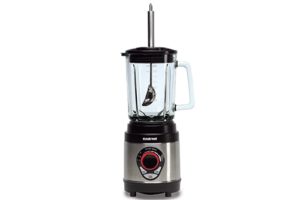 As a dietitian, I’m embarrassed to admit that I’ve been way behind the smoothie bandwagon. Sure, I’ve made smoothies before. But over the past year or so, juicing and blending everything — from spinach and kale to berries and chia seeds — has become quite a food trend.

Now, as summer temperatures settle in Boston, I decided that the time for smoothie making had come, and the Dynablend Horsepower Plus blender was going to be my tool.

I’m a believer in using whole foods rather than supplements. Most of us aren’t athletes and don’t require large amounts of any one nutrient (like protein). So I wanted to find a couple of different smoothie recipes that provide balanced nutrition using whole foods. But I was also eager to blend up some different ingredients that I had never used in a smoothie before. I also wanted these ingredients to challenge the Dynablend.

In the past, I used a so-so blender that stalled out and left massive chunks of food in my smoothies. I was hopeful that this shiny new blender could put the “smooth” back in “smoothie.”

After scouring Pinterest, I decided on two different but yummy sounding smoothies. The first, called “The Pink Breakfast Smoothie,” caught my attention because it’s a fully balanced meal in a glass. It contains a banana, oats, honey, peanut butter, almond milk — all ingredients I love! Plus, I was eager to see how the Dynablend would handle the oats. Let me say — it was absolutely fabulous.

The Dynablend created a smooth-yet-thick drink that was not only delicious but successfully kept me full for a few hours. I used the 60-second blend button which uses a variety of mixing speeds and pulses. After one use, I was sold, both on the smoothie recipe and the blender!

The second was a blueberry green smoothie from the blog Damn Delicious. This was my first attempt at using both chia seeds and spinach (along with those ingredients, this was made with frozen blueberries and raspberries, banana, milk, oats, and sugar) in a smoothie. I couldn’t wait to see how it would turn out.

It was oh-so-good! The color was not the least bit green, which is useful because many people are averse to trying a green smoothie because of the color. For those afraid of drinking your greens, know that this one tasted like a good, old-fashioned fruit smoothie. But the great news is that it’s packed with fiber, vitamin C, potassium, calcium, omega-3s and antioxidants. This is literally a powerhouse in a glass.

The only caveat is that this drink did not come out as smooth. Between the chia seeds and the little blueberry seeds, it was a much grittier drink, even with the Dynablend’s powerful motor. I don’t mind this but if you or a family member don’t like textures, this might not be the drink for you.

After my experimenting I can say that I am in love with the Dynablend Horsepower Plus — and I am an official smoothie convert. As Dynablend’s marketing materials attest, it is one of the most powerful and affordable blenders on the market. I whole-heartedly agree and can’t wait to see what new recipes I can add to my repertoire with this great addition to my cabinet of culinary gadgets.

Marci Evans, MS, CEDRD-S, counsels clients and manages her group practice in Cambridge, MA. She also brings her passion and skill in the eating disorders field to students, interns and clinicians with online trainings and clinical supervision. Connect with her at www.marciRD.com and all social media outlets @marciRD.