From street stalls and noodle houses to celebratory feasts, noodles are ubiquitous throughout Asia. With a history most likely beginning in Central Asia and reaching back thousands of years, it’s no wonder this versatile staple is an essential part of the culinary and cultural landscape in many countries. Particular noodles in each country often become synonymous with specific dishes, such as pad thai, pho and ramen.

Unlike European pasta, which varies in shape and size but is largely made of the durum wheat flour semolina, Asian noodles are more uniform in shape but vary in thickness, width and ingredients. Based on local ingredients, they can be made of wheat, buckwheat, millet, rice, yam or sweet potato and mung bean. Textures range from soft to chewy or springy, resistant or even crispy when stir-fried.

With regard to nutrition, Asian noodles are primarily composed of carbohydrates with slight differences in vitamin and mineral content, depending on ingredients used. A dry two-ounce serving has about 200 calories or more. Watch out for sodium, as levels vary greatly from very low (noodles with no salt added) to more than 1,000 milligrams (dry somen noodles).

When it comes to cooking, Asian noodles are extremely versatile.

They form the foundation on which flavors, textures and condiments are built into meals. To make a healthy and satisfying meal with noodles, add meat, fish, chicken or tofu, a hefty dose of vegetables, a sprinkle of nuts and herbs, and a drizzle of flavorful sauce. Sold fresh or dried, Asian noodles are easy to store and cook. They are widely available in the United States and often are served in soup, stew and stir-fry.

In Japan, slurping noodles is not only accepted, it’s encouraged. Just don’t cut your noodles. In many Asian countries, long noodles symbolize a long, happy life. 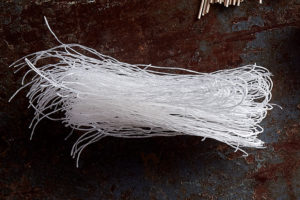 Made from mung bean starch or flour and water, cellophane noodles can be deep-fried, stir-fried or softened in boiled water. Also called glass noodles, they are thin, slippery and often used in desserts. 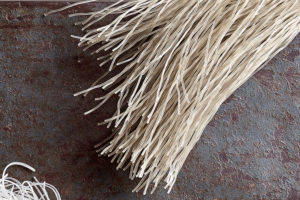 Long and thin, this Korean noodle is similar to vermicelli. Made with white sweet potato starch, it’s sometimes referred to as a Korean cellophane or glass noodle because of its translucent appearance and slippery texture. It is most commonly found in the Korean vegetable noodle dish japchae. 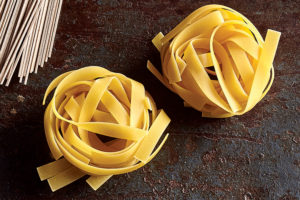 Made from wheat flour, eggs, water and salt, egg noodles are found throughout China, Hong Kong, Singapore and Taiwan. They can be long and thin or thick and flat, and are used in many dishes such as lo mein, chow mein, dan dan noodles or dan dan mian. 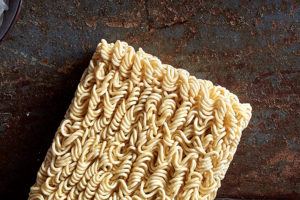 A widely consumed Asian noodle, ramen is most familiar as dried instant blocks, but also is available fresh. Traditionally made with wheat flour, egg, salt and an alkaline agent, which makes the thin noodles wavy and springy, ramen is a favorite of college students on a budget and a mainstay in soups all over the world. 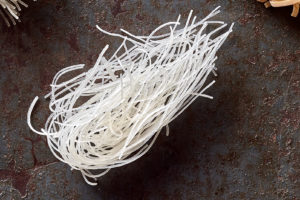 Made from rice flour and water, these snow-white or light brown noodles are available in various sizes from thin, delicate vermicelli to fat, thick ribbons. They are found in a variety of Asian dishes but are most well-known for pad thai and Vietnamese pho. 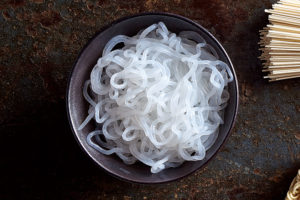 Long, thin or flat and translucent with little flavor and a gelatinous texture, these noodles are made of the Japanese yam-like tuber konjac. With almost no calories and high in fiber, they absorb flavors of foods with which they are cooked. Tofu shirataki also is available. 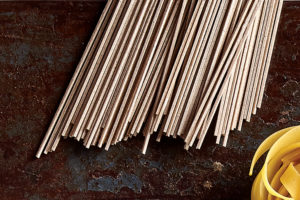 Traditionally made of a blend of buckwheat and wheat, this Japanese noodle has a slightly earthy, nutty flavor and often is served in cold noodle salads or hot soups. Depending on the quality of the noodle, the color varies and the amount of buckwheat used can range from 10 percent to 100 percent. 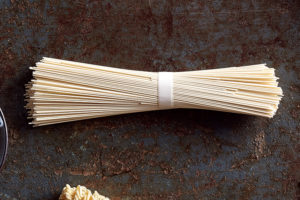 Often used in cold noodle dishes, these thin and delicate Japanese noodles are made of wheat flour and water. A slightly yellow version made with egg yolk also is available. Somen noodles are usually sold dried and bundled like sticks. 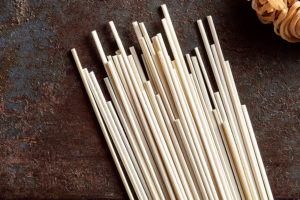 Similar to spaghetti, this long, thick, white noodle has a chewy texture and is made with wheat flour, water and salt. It’s often used in Japanese soups and stir-fries or served cold with dipping sauces. 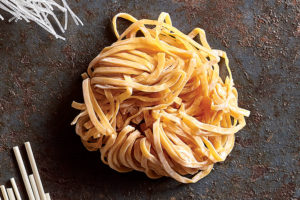 These noodles can be thick or thin and are made from the same yellow-colored dough as wonton skins. Often sold fresh in the refrigerated section of stores, they’re a popular choice in soups.