Although chili peppers were cultivated and traded in the Americas for thousands of years, it wasn’t until explorers brought these fiery fruits from the New World back to Europe that their popularity spread. Today, chili peppers are found in cuisines all over the world. Chili peppers belong to the nightshade family — which includes tomatoes, potatoes and eggplant — but are not related to black pepper, which comes from the peppercorn plant. There are literally hundreds of chili pepper varieties ranging in all sizes, shapes and colors. Capsaicin is the ingredient in peppers that give them “heat,” and this, too, varies — from the mildly sweet, slightly hot Anaheim pepper to the fiery burn of the habanero. Capsaicin also stimulates the release of endorphins, natural pain and stress fighters, which give eaters the feeling of a “chili pepper high.” Capsaicin has been shown to curb appetite and slightly boost metabolism and fat oxidation.

Chili pepper hotness is measured in Scoville Heat Units, or SHU. The hottest pepper on record is the Carolina Reaper with a Scoville rating of more than 1.5 million units. (A mild jalapeño has a score of 2,500 to 5,000 units.)

Nutritionally, peppers are high in vitamin C, and generally a good source of beta carotene, potassium and vitamin B6. They are low in calories and sodium, and also contain some fiber and vitamin K.

Contrary to popular belief, most of the capsaicin is located not in the seeds, but in the ribs of the pepper. Always wear rubber gloves to prevent burning your hands and beware of rubbing your eyes or skin. Although time is the only real way to cool the burn of eating a chili pepper, if you’re desperate, try drinking milk or eating dairy, bread or rice. Avoid alcohol, which can magnify the burn. 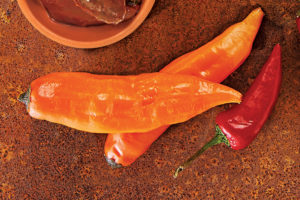 This yellow pepper, generally about 3 to 5 inches long, is particularly popular in its native country of Peru, although it can be found throughout South America. It has a unique fruity flavor and a spicy heat that ranges from medium to hot. 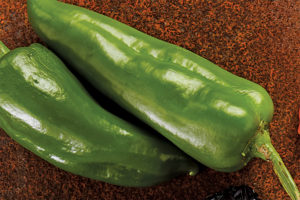 Named after the city of Anaheim in California, these long, thin green peppers are on the mild side. Like all green chilies, they are high in vitamin C and low in calories. 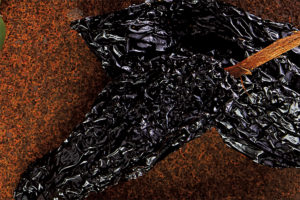 With an aromatic, earthy, fruity flavor laced with hints of chocolate or coffee, this dark and wrinkly pepper is actually a dried poblano! Anchos are the main peppers used in Mexican mole sauces and are high in iron. 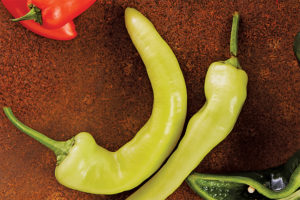 Also known as the Hungarian Wax Pepper, this medium-sized, pale yellow pepper resembles its namesake. Banana peppers can be mildly sweet or hot and, like cherry peppers, are often pickled and used as a garnish. 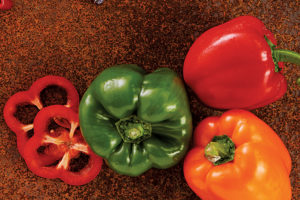 With zero capsaicin, these mild-flavored peppers can be green, red, yellow, orange or purple. Green peppers are high in vitamin C and are a good source of beta carotene. But, because they are harvested early, they have less nutrients than other bell peppers. Red peppers take the longest to harvest, are the sweetest and have the highest levels of nutrients. 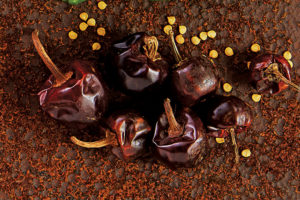 A dark red, dried, round or plum-shaped pepper (cascabel means “little round bell” or “rattle”), this chili has a rich, nutty flavor with woodsy, smoky overtones and a medium heat. Use it in soups, salsa, sauces and cooked dishes. 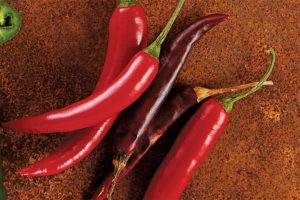 Dark red, thin, wrinkly and ranging in size from 2 inches to 5 inches, cayenne peppers are extremely hot and pungent. They are often found whole in Hunan, Sichuan and Indian cuisines. 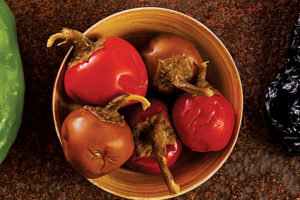 A round red pepper that can range in taste from mild to medium hot, the cherry pepper is often pickled and placed on sandwiches, pizzas and salads. 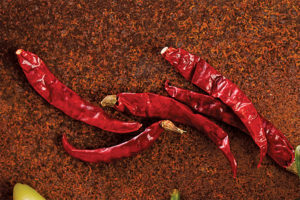 This small, slender, red chili pepper hails from Mexico and can be sold either dried or fresh. Chile de arbol has a potent heat with a subtle smoky flavor. 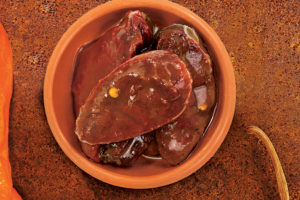 These dried and smoked jalapeños have a pungent, smoky sweet flavor. They are high in vitamins A and C, and often found canned in adobo sauce. 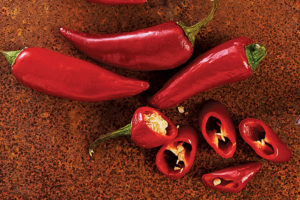 Another pepper named after a city in California, Fresnos are similar to jalapeños in flavor and appearance, with a back-of-the-throat type heat. 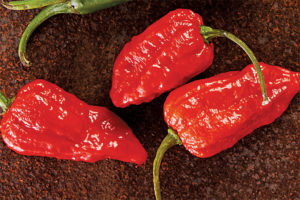 Hotter than a habanero, the Ghost pepper (a.k.a. Bhut Jolokia) originated in India. Some say it was named for the way the heat sneaks up on you. At first, ghost peppers have a sweet chili taste; the heat kicks in after about 45 seconds and intensifies for 10 to 15 minutes. Do not touch these peppers with your bare hands! 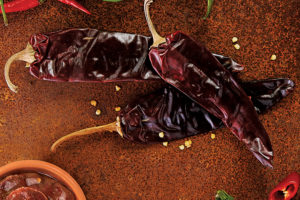 This smooth, dried pepper native to Mexico is long and thin with a sweet heat and a taste reminiscent of pine. 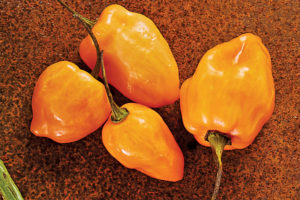 Also known as the “scotch bonnet,” these small bell- or lantern-shaped peppers range in color from orange to red. Once considered to be the hottest pepper before other hotter strains popped up, these extremely hot peppers have fruity, citrus-like flavor notes, making them ideal for hot sauces. 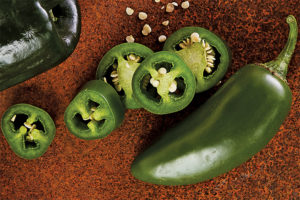 The most widely available hot pepper, Jalapeño come in red or green varieties and are small in size at 2 to 4 inches long. High in vitamin C and a good source of vitamin A, they have a back-of-the-throat burn that can vary widely depending on climate and soil. 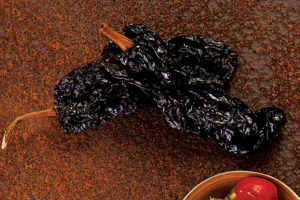 A dark, black, wrinkly pepper, mulato peppers have notes of licorice or chocolate with hints of cherry or tobacco. They are often combined with anchos in adobo and mole sauces.

New Mexican
Similar in size and shape to the Anaheim, New Mexican chilies can be red or green. They do not have a lot of heat, but they offer a deep, roasted flavor that makes them very popular. Red varieties contain vitamins A and C. Those grown in the Hatch Valley are called Hatch peppers. 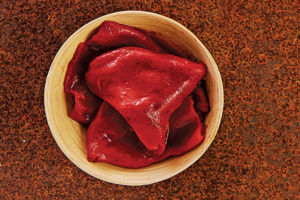 A sweet, spicy flavored red pepper tapered at the end, it is primarily grown in the Navarra region of Spain. Piquillo peppers are often roasted and stuffed with cheese or fish for a savory, mild flavor. They are also popular on sandwiches. 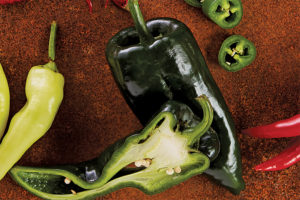 These dark green chilies that taper to a point and looks like a flattened bell pepper have mild heat and full, rich flavor, making them popular throughout the Southwest. Often stuffed, this pepper is famous in the dish chile relleno. Poblanos are low in calories and high in potassium, vitamin A and vitamin B6. 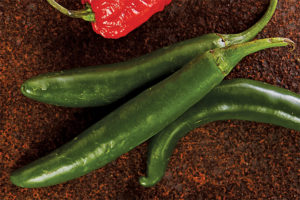 A small, sleek green or red pepper, this serrano is similar to a jalapeño, but hotter. It is usually found in Mexican markets and sometimes in supermarkets, and is high in vitamins C and B6. 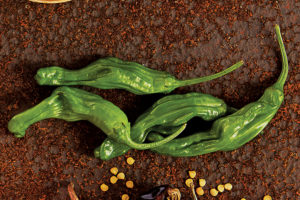 Small, thin, sweet green peppers with only a slight bite, Shishito peppers hail from Japan. They are best sautéed with a dash of sesame seed oil or fried in a tempura batter. They can found in green or red varieties. 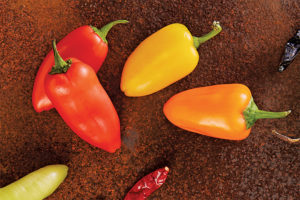 At about 2 inches in length, this miniature bell pepper is popular for its fresh, mild flavor. Most often found in red, yellow and orange, they’re great in salads, sliced on a sandwich or on their own as snacks. 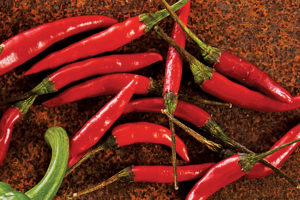 Also known as “bird chili” or prik khee noo, these tiny peppers pack a big punch. They range in color from red to yellow or light green, and are used to flavor curries and other Thai dishes.