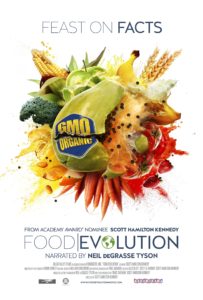 Description: Food Evolution offers a science-based conversation about food, exploring the polarizing debate about genetically modified organisms (GMOs), interviewing experts on both sides of the issue and delving into the grey areas where beliefs, fear and science collide.

Synopsis: While Food Evolution focuses on the debate over genetic engineering, and organic food to a lesser extent, the filmmakers broaden their focus to more complex issues surrounding nutrition and other areas of science. One of these is beliefs versus facts. Another is how fear of the unknown and anger about corporate greed can cloud objectivity. Another is erosion in trust of authority figures, whether that be scientists, medical professionals or the government.

Unlike some recent food-related “documentaries” that have a clear agenda from conception and interview only experts who support that agenda, Food Evolution’s filmmakers investigated both sides of the debate over GMOs, interviewing both scientists and activists. The film’s backstory details the filmmakers’ quest to let the science speak for itself.

Pros and Cons: While the film came out in favor of GMOs, in line with scientific consensus, the film provides balance in its presentation, minimizing the “us versus them” feel that is present in so many recent food films. In this way, it is hard to call the film “pro-GMO,” per se. The film does not portray genetic engineering as a panacea for all the world’s food issues, instead offering the view that GMOs should be evaluated on a case-by-case basis. With that in mind, the filmmakers present compelling case studies that clearly show the benefit for both economic and nutritional health of specific populations, including papaya farmers in Hawaii and banana farmers in Africa.

Through its interviews, the film demonstrates compassion for both the individuals who oppose GMOs out of genuine concern for themselves, their families or the environment, as well as the farmers whose livelihoods — which, in some cases, literally means being able to grow the food that goes directly in their children’s mouths — depend on solutions offered by GE technology.

The film also highlights the authoritative-sounding claims made by high-profile GMO opponents — who, in most cases, are not scientists or health care providers — that are not supported by science. For example, claims that eating GE papaya increases risk of infection with colds, hepatitis and HIV, or that a correlation between increases in glyphosate use and autism rates proves causation (interestingly, there is a nearly identical correlation between increase in organic food sales and increase in autism rates). The filmmakers also take a nuanced look at the issue of whether adoption of GE technology in the fields has increased pesticide use.

Bottom line: I have long been agnostic about GMOs, knowing from digging into research literature that no evidence-based case could be made for their lack of safety, yet wondering if their introduction into the food supply without full vetting by the FDA meant that we were all guinea pigs. While this film may not shift the thinking of someone who is vehemently against GMOs, its insights will be useful for fence-sitters like myself, as well as for viewers who have been “casually” anti-GMO but haven’t fully explored the foundation of their opinion. The film’s broader theme of beliefs versus science also is of great value, providing robust food for thought for both nutrition professionals and consumers of nutrition information.

Carrie Dennett, MPH, RDN, CD, is a Seattle-based dietitian and journalist. She is the nutrition columnist for The Seattle Times and blogs at NutritionByCarrie.com. Follow her on Twitter and Instagram.