#NutritionIsLife #JusticeIsLife #DevotedToDietetics #DevotedToJustice #ThereIsNothingYouCannotDo — I stand by these hashtags, and they are the driving force for everything I hope to bring forth in this world. From the time I was accepted to college at the historical Tuskegee University to today, I have loved nutrition and dietetics.

From the time I entered high school, I have fought for justice, equity and an end to iniquity.

Everything we put into our bodies affects our lives either positively or negatively — some having a greater impact than others. My decision to become a registered dietitian was a subconscious one. As a child and adolescent, I wanted to be a medical doctor. That is, until I reached my senior year of high school.

Southern cooking was my family’s way of life. My grandfather suffered a stroke, my grandmother suffered from heart disease and hypertension, and my mother and grandmother both received diagnoses of diabetes. These factors developed my sustained passion for becoming an RD.

I knew that becoming an RD would enable me to reach more of the population and allow me to offer more of my zeal. In realizing and truly understanding the bearing nutrition has on overall health, and in order to help improve the quality of life for others, I began the journey. I chose a career in dietetics — rather, it chose me — because, ultimately, nutrition is life.

From the second grade until high school graduation, I received my education within a predominately white school district in South County St. Louis, MO. When I was 10 years old, I earned the opportunity to complete two three-week summer enrichment program components within another predominately white school district. Each day for two weeks, I would arrive and attend summer school for math. I was a kid and I went where the grown-ups told me to go. I knew I didn’t need help with math because I was versed in the quadratic formula at the time and never earned less than an A in any math class I took. But each day, I continued to arrive and go to summer school.

I was embarrassed, and I was traumatized. As a 10-year-old kid, I walked into a program that was nearly over — the only Black kid in the room, as usual. Everyone had already bonded. They had been working on nifty science projects together for weeks. So, not only was I the only Black kid, but I was completely alone in all other aspects as well. After the first three-week session concluded, I told my mother that I did not want to go back for the other half. I did not want to feel alone for another three weeks.

Imagine if I had started with the other children. I tried to imagine but never could. That experience, the one I had earned, was stolen from me, all due to the assumption that if a Black child entered the building, it must be because they failed a class and needed summer school.

I did not fully grasp the impact of that injustice at the time, but by 14 years old I knew this nation and the mindsets of its citizens were not right. I knew the state of things needed to change.

I was the only Black student in our National Honor Society in high school. I was the only Black student in all of my AP math and science classes. Yet, I knew I was not the only capable Black student. By the time college applications were due, I felt the only option for my emotional and mental well-being was to attend a predominately and historically Black university. I needed to be surrounded by Black valedictorians, scholars and game-changers; because I knew we were capable. As prestigious as Tuskegee University is, I still noticed it was looked upon as less than. Even surrounded by such excellence, I had the constant underlying mentality of needing to prove my and our worth.

On my journey to becoming a registered dietitian, I became active in the Academy. I served on the Diversity and Inclusion Committee (formerly Diversity Committee) for five years — two as a member, then Vice Chair, Chair and Past Chair. I belong to four dietetic practice groups and one member interest group. I was in the first group of FNCE® Ambassadors in 2019.

I advocate for my profession and organization in everything I do because saving and enriching the lives of people through nutrition and dietetics means everything to me; it is part of my reason for being. Even after attending the award reception for one of my DPGs at FNCE® as the only Black person in the room, and being wholly ignored the entire time, I rejoin each year and give my all. I am devoted to dietetics for others, not for myself. I am willing to surmount any adversity to serve the community.

But why should I or anyone have to endure such adversity?

Food systems are one of the many systems that continue to create disparities in the health, wealth and success of our nation’s citizens. Until the iniquity is acknowledged, addressed and dismantled, Justice for All is not a possibility. We must all be devoted to justice.

There is Nothing You Cannot Do

The percentage of Black RDNs has remained less than 3 percent for well over a decade, in spite of purported efforts toward diversity, inclusion and growth. The Academy is an organization of tens of thousands of esteemed food scientists, medical nutrition therapists, foodservice managers, agriculturists, epidemiologists, public health practitioners, entrepreneurs, professors, researchers and problem-solvers — all in the form of RDNs. Many members hold advanced degrees that require critical thinking and analysis to compose a thesis or dissertation. We are made to assess, diagnose, intervene, monitor and evaluate via evidence-based practices.

All dietitians must utilize their resources to alleviate the impacts of systemic racism as it relates to food and nutrition. We have great power over the nutritional health of the nation’s population and we have an ethical obligation to use that power effectively and efficiently.

Let me phrase this as a PES statement: Nutritional disparities related to systemic racism as evidenced by the entire food system.

It is implausible that, among professionals, membership, and leadership, we don’t have what it takes to provide effective interventions for this etiology. And the intervention begins with toiling for justice in every facet, on every platform.

As educated, determined, and resourceful as we are, there is nothing we cannot do. Nothing. 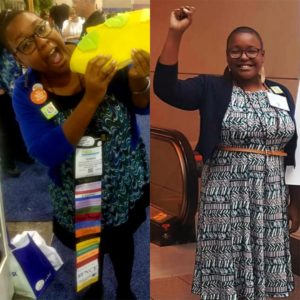 She has regarded the field of Dietetics as her passion for over 19 years; focusing ardently on child nutrition during the past eight years. She immensely enjoys public speaking and providing education and training as a means to share and utilize her zeal. Teresa received her B.S. degree in dietetics from the historical Tuskegee University, her M.S. degree in nutrition and dietetics from UDC, and completed her dietetic internship at Iowa State University. She currently serves as President-elect of the Maryland Academy of Nutrition and Dietetics (MAND) and looks forward to what her service will contribute to the community and to the profession.