With a history rooted in the Bible and the writings of Hippocrates, lentils have maintained prominence in Middle Eastern and Indian cuisine since their cultivation 8,500 years ago.

A member of the legume family, lentils are edible pulses — dried seeds grown in enclosed pods. Lentils are high in protein and fiber; one cup cooked contains 18 grams of protein and 16 grams of fiber. A one-cup serving is an excellent source of folate, as well as iron, potassium and phosphorous, and a good source of magnesium. Research shows regular intake of pulses, such as lentils, lowers cholesterol and helps reduce risk of heart disease, diabetes and certain cancers.

Unlike dried beans, lentils require no overnight soaking and cook quickly in 15 to 20 minutes, making them easy and convenient kitchen staples. Beware of adding salt or acidic ingredients, such as tomatoes or lemon juice, to lentils while cooking, as this can toughen the legumes’ skins and dramatically increase cooking time.

Mild in flavor, brown lentils in particular are often used as a meat substitute or extender in dishes, including chili, tacos or meatloaf. Pureed cooked lentils are used as a thickener in soups and stews and can replace some of the fat in baked goods, such as quick breads and cookies. 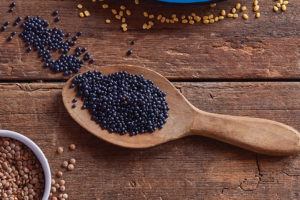 Visually striking when mixed with salads and grains, these small, black and shiny lentils have a strong, nutty and earthy flavor. They also hold their shape well. Black lentils tend to be more expensive than brown lentils. 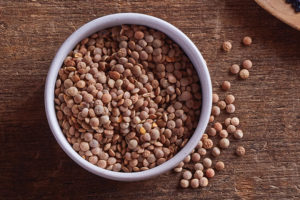 Considered the workhorse of the lentil family, this is the most common variety. With a mild flavor and earthy taste, brown lentils are used in a range of culinary applications and tend to retain their shape and texture. 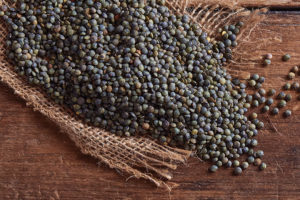 Compared to brown lentils, French lentils are slightly smaller, take longer to cook and have a stronger, peppery flavor. However, they retain their shape and stay firm, making them ideal for cold salads and side dishes for fish, game or sausage. 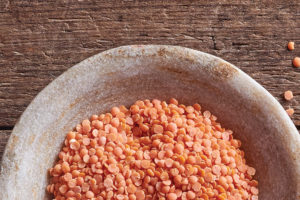 Common in Indian cuisine, these small, thin and salmon-colored lentils sometimes share the name of their most common dish, masoor dal. Pink lentils cook quickly, turning a golden color and breaking down into a silky smooth texture, which makes them a great choice for soups and side dishes. 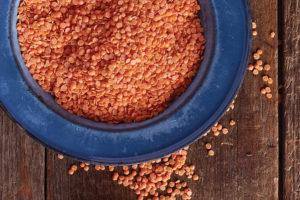 Thinner and softer than brown or French lentils, this type breaks down quickly and does not hold its shape, making it best suited for soups, stews and Indian dals. Since red lentils pack down easier, a serving tends to be higher in calories, carbohydrates and protein than French or brown lentils. 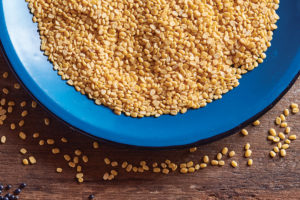 Sometimes confused with yellow or green split peas, yellow lentils break down quickly when cooked, making their texture ideal for soups and dals.