The foods in the eastern cities of Adana and Mersin actually fit more with the types of foods found in the Southeast Anatolia region, including dishes such as a spicy minced-lamb kebab (Adana kebabı) and stir-fried beef or lamb wrapped in thin bread (tantuni). More traditional Mediterranean dishes typically include seafood, fresh produce and olive oil.

The sunny and warm Mediterranean climate makes this region particularly well-suited to agriculture. In some areas, farmers are able to grow bananas, avocados and pineapples because they do not experience a frost at any point in the year. Many of the crops grown in this region are made into jams. Preserved foods (including jam, yogurt and dried fruits and meats) are important in the Turkish tradition of moving inward from the coast to the high plateau regions (yayla) during hot summer months to let livestock graze. While few still live this nomadic lifestyle, preserved foods still inform Turkish food culture.

From the city of Antalya, the dish Antalya piyazı is packed with nutritious ingredients and bold flavors: white beans, fresh vegetables and herbs are tossed in a tangy dressing of extra-virgin olive oil, tahini paste, lemon juice and red wine vinegar.

While piyaz is often served as a side dish, I think that this recipe can stand alone as a main dish. This recipe contains hard-boiled eggs, but if you would like to make it vegan, decorate the salad with some olives instead. 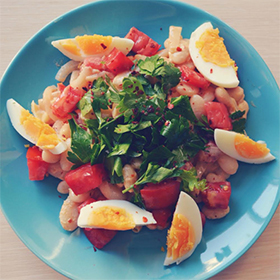 Brittany Peterson, MS, RDN, is a supermarket dietitian based in New Jersey.