Food & Nutrition Magazine invited three Stone Soup bloggers to join a screening of the film Food Evolution (Black Valley Films with Boomdozer, Inc., 2016) and share their feedback. Here’s how they 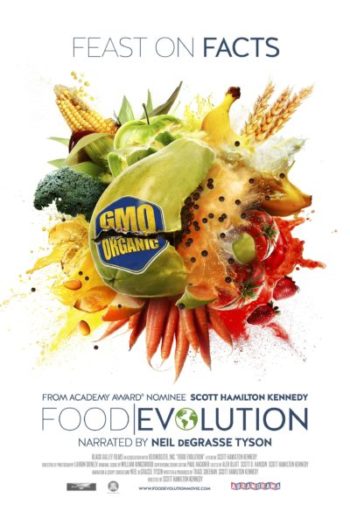 “Food Evolution offers a science-based conversation about food, exploring the polarizing debate about genetically modified organisms (GMOs), interviewing experts on both sides of the issue and delving into the grey areas where beliefs, fear and science collide.”

“The film Food Evolution asserts that genetically modified organisms (GMOs), despite a controversial reputation, are a safe and intelligent solution to feeding an over-populated world.”

This film discusses global GMO crops and foods in our food systems. Each component of the film provides both sides of the conversation for the viewer to be equally educated to develop their own decision on GMOs. This includes the following: the science behind a crop possibly going extinct because of disease and how a GMO crop can preserve it, maintain the livelihood of the farmers and the economy of a county; the safety of a GMO food if consumed by humans based on science and from personal human choice… Read Anne Elizabeth’s full review.

While Food Evolution focuses on the debate over genetic engineering, and organic food to a lesser extent, the filmmakers broaden their focus to more complex issues surrounding nutrition and other areas of science. One of these is beliefs versus facts. Another is how fear of the unknown and anger about corporate greed can cloud objectivity. Another is erosion in trust of authority figures, whether that be scientists, medical professionals or the government. Read Carrie’s full review.

Through his film, Food Evolution, the director aims to furnish some answers to the questions of how the science behind GMOs might be used to feed the earth’s growing population. While portraying those concerned about the health and environmental impacts of GMOs as misinformed and fear-mongering, he champions the developments of certain GMO foods as a way to improve crop resistance to disease and drought. Read Adrienne’s full review.

Food & Nutrition Magazine publishes articles on food and diet trends, highlights of nutrition research and resources, updates on public health issues and policy initiatives related to nutrition, and explorations of the cultural and social factors that shape Americans’ diets and health.